What can you do in 6 seconds?? Well according to Primera we can all print beautiful rich colour, high resolution full face CDs, DVDs and Blu-Ray discs.. so what are you waiting for. Yes its true subject to some loading and unloading time 10 disc will now print in 1 minute, that’s 600 discs per hour. It’s true the new Primera 4100 series disc printers and disc publishers really do a remarkable job of printing. In addition to the print time you need to remember at very least time to load and unload the discs from the printer will add to the overall time of throughput. Whatever once you see the 4100 series printers and publishers we think you will be suitably impressed. Additionally all Primera disc publishers feature 2 years manufacturers warranty. For more information or a demo call us on 020 8293 0777.

Of course Primera is just one manufacturer of disc publisher who’s products we supply and support. To get more information about all the options available please do not hesitate to call our specialist team on 020 8293 0777.

Another great day at the BVE Expo and Broadcast production show.

Panasonic (K30) is attracting plenty of attention with both its fully integrated Full HD 3D camcorder, the AG-3DA1, and a new 3D ready mixer, the AV-HS450, which is a 2-piece switcher that includes a built-in dual monitor MultiViewer for displaying up to 20 images on two screens.

Sony (I20) has a couple of interesting debuts at the show too including new OLED displays. The reference-grade BVM-E Series comes in 25 and 17-inch sizes and incorporates “processing and imaging capabilities designed to give digital production professionals a true replacement for CRT in critical evaluation applications.”

As you’d expect, there are also plenty of deals being done. SGO has been particularly active, selling a second Mistika finishing system to post house BTV. The deal follows a double sale to Sky and a deal with On Sight for a Mistika Live on-set viewing station.

At the same time, Jigsaw Systems (I32), the IT solutions supplier, has been named as the UK distributor for Cubix GPU-Xpanders. The appointment marks the first time that Cubix products and services will be distributed and fully supported in the UK.

So, what else has caught the imagination? Judging by the buzz around its booth, Live Vision (TPS 656) has something unique in Chameleon, a previsualisation system that allows users to see an actor in relation to a virtual scene in real time. It’s been developed through an ongoing partnership with Mo-Sys the independent film and media studio.

The Flyka Electric Dolly (Vehicle Area) is another popular draw. Developed by the photographer and cameraman Tony Holke – who adapted a disabled buggy to help him to continue to work when he broke his leg – it’s not a replacement for a track and dolly but a new filming option that could save time between setting up shots and laying track.

Something special to look out for tomorrow. ‘Debate: The Immense Challenges of Super Hi-Vision‘ (1:30 Broadcast Meets IT seminar) will feature the first public showing of an NHK 4000 Super Hi-Vision flat screen display. It’s another BVE first.

And finally, the Vision Charity (Stand K32) has announced a new fund raising event that will see 14 hardy souls – including Ciaran Doran of Harris Corporation – cycle from London to the IBC Show in Amsterdam within 24 hours. All money raised from the initiative will help support blind and visually impaired children throughout the UK.

The queues snaking down towards West Brompton underground station told the story. BVE 2011 is open and it’s clearly catching the imagination of whole swathes of the broadcast industry.

And that’s not surprising judging by the quality of exhibitors and sessions on what is still only the first day of the show. Both BVE and The Production Show are buzzing and awash with talk of major announcements.

In what is something of a coup, one of the industry’s biggest names, Avid (Stand J10) , has used BVE 2011 to introduce new versions of its flagship editing systems.

A new Avid PhraseFind (powered by Nexdia) is also included as an add-on phonetic search option that allows users to streamline clip and project management and simplify the dialogue editing and logging process.

When asked about the decision to launch version 5.5 at BVE, Angus Mackay, the marketing manager for Avid’s professional segment, said: “We could have held the release until NAB but we decided that, to show our support for UK and Europe, that this show would be the ideal place to do it. We’ve also worked very closely with Sky on the development of the Nitris DX AVC-Intra box so it seemed very suitable.”

There’s been plenty of other exciting launches at BVE too. Canon UK (Stand E34) has announced its smallest-ever professional grade handicam, the XA10, which weighs 820g and shoots 1080p HD video in H.264 and AVCHD. The company is also showing its XF105 camcorder for the first time in the UK.

Stereo 3D is, of course, everywhere today with advice and best practise sessions in both The Production Show and BVE’s 3D Revolution Theatre.

There’s an interesting theme linking all of the sessions which is that making good quality 3D is crucial and that it is very easy to make bad 3D.

Vicki Betihavas of Nineteen Fifteen said in her ‘3D for Producers’ session said: “In 5 years, 3D will simply be a choice that the consumer makes. They might not watch the news in 3D until we get 3D that doesn’t require glasses but this will come. The thing that will screw it up is bad 3D. Nothing will turn people off faster.”

Alongside the serious stuff there are, of course, plenty of diversions too. Not least on The Bridge Training, Alias Hire and The Crewing Company stand (TPS 330) where there is a Top Gear-style virtual racing competition. It’s only day one but it looks like it is already getting competitive.

Doors open at 9:30am.  If you’ve yet to register, click here for free entry to tomorrow’s show. 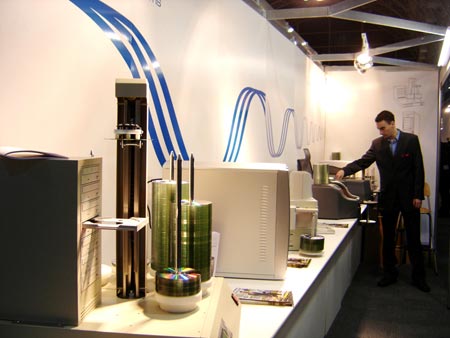 As always CD-writer.com is actively supporting our partners at the 2011 BVE Expo and Broadcast production show. The BVE Expo is a great opportunity to get your hands on some of the systems we supply. At the show you will be able get demos on Microboards, Primera and StorDigital systems. All show visitors will become automatically eligible for exclusive offers on a range of our best selling products. All you need to do is give us your BVE Expo ticket ID, (Unique Priority Code) at the time of placing your order. Or simply call us on 020 8293 0777.

So if you are visiting the show this week, 15th to 17th February at Earls Court 2, and you are interested in purchasing any of the systems we offer that you have seen at the show then get in touch to see how we can work out the best deal for you. Must see products include Primera’s 4100 Series 6 second disc printers and disc publishers, MicroBoards PrintFactory Pro, USB Duplicators and much more.

CD-writer.com are not exhibiting at the BVE Epo or Broadcast production show this year.

The 4100 OEM Print Engine is shipped with a generic printer driver that can be easily adapted to the OEM’s brand and terminology. As shipped, the unit is UL-listed and FCC-approved. A sturdy metal frame with precise locating feet makes it fast and easy to mechanically mount on a variety of OEM robotic platforms.

Primera’s 4100-Series inkjet technology delivers a new industry standard for speed, reliability and ease of use.

Blazingly Fast Printing and Robotics
Print speed for a full-color, 100% coverage disc is just 6 seconds – a breakthrough in the industry. Compare that to 20 to 240 seconds for other print engines, including those using thermal transfer and dye-sublimation print technologies.

High-speed printing is complemented by 4800 dpi print resolution. Ink use is highly efficient with separate ink cartridges for cyan, magenta, yellow and black. Your customers will save money on every disc they print versus tri-color ink cartridges.

OEM-Friendly Design
The 4100 OEM Print Engine is shipped with a generic printer driver that can be easily adapted to the OEM’s brand and terminology. As shipped, the unit is UL-listed and FCC-approved. A sturdy metal frame with precise locating feet makes it fast and easy to mechanically mount on a variety of OEM robotic platforms.

You can find more information about this printer here.

Primera has finally joined the blogging sphere with the release of their new
blog. You can check it out here.

We wish them the best of luck!